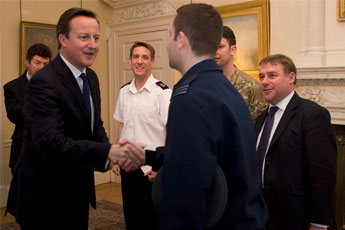 The launch of the Defence Privilege Card coincides with the publication of the first annual report on the Armed Forces Covenant. This sets out key disadvantages the Government has tackled over the last year to improve life for our Armed Forces community and ensures personnel and their families are not unfairly affected by their service to their country.

Handing out the first Defence Privilege Cards at No 10 Downing Street yesterday, the Prime Minister, David Cameron, said:"I am delighted that we have managed to get so many companies to sign up to this - and just in time for Christmas. As well as allowing people to save money, these discounts are a token of the immense appreciation that we all have for our Armed Forces.It is fitting that the cards are launched in the year that the military have done so much for our country, not just abroad but here in the UK, showing the very best of British during the Olympics and the Jubilee."Minister of State for Defence Personnel, Welfare and Veterans Mark Francois added:"The men and women of our Armed Forces, their families and our veterans reflect what is best in our society. That is why we are committed to rebuilding the Armed Forces Covenant and it is with great pride that I am publishing the first ever Armed Forces Covenant report today."